“Events In The City Are The Bloodline Of Manchester”, Says Sacha Lord. Here Are 6 Events You Can Support This September #WeMakeEvents 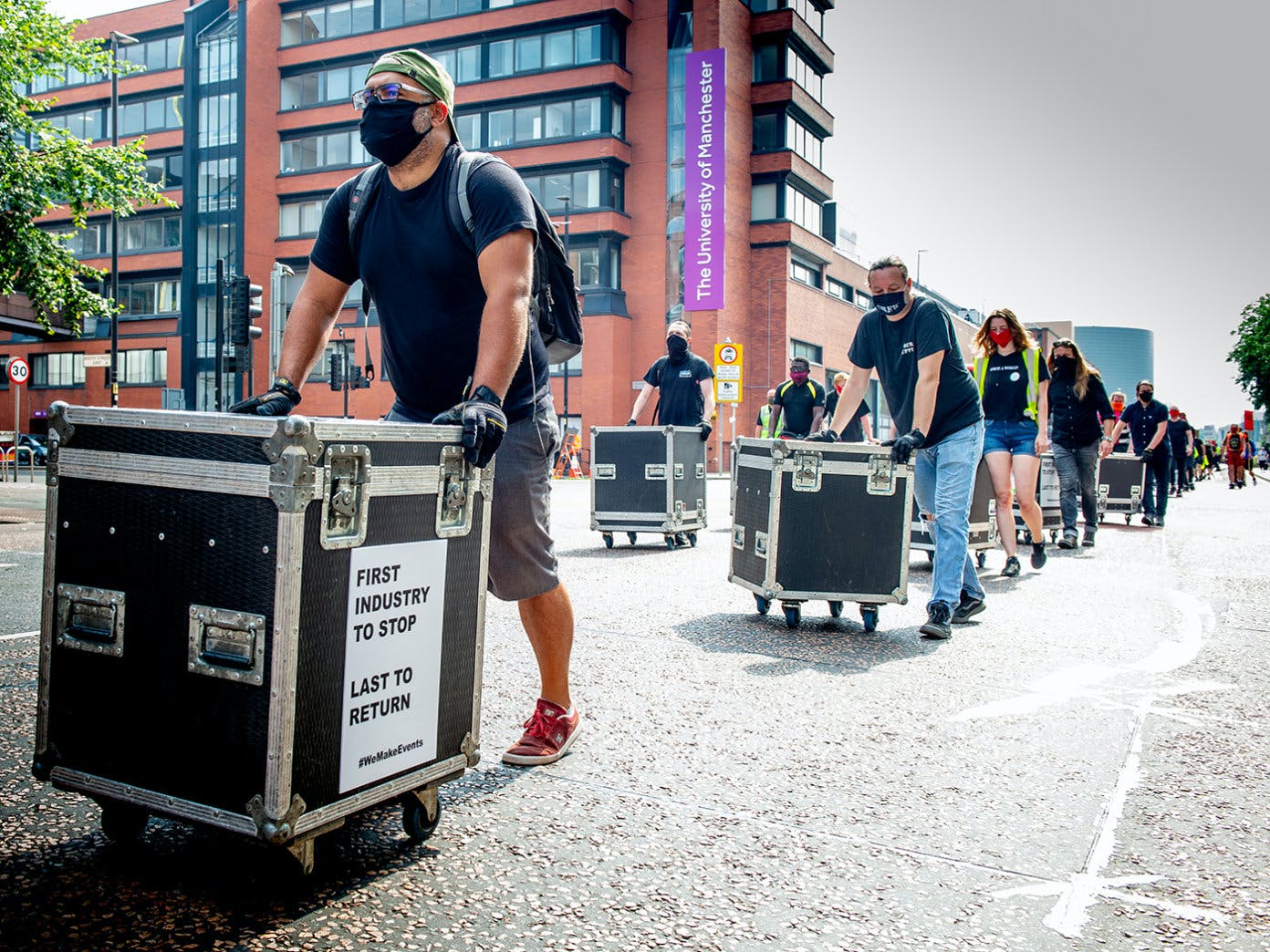 The #WeMakeEvents protests that occurred across Manchester in August shone a light on just how important the events industry is for the economy here in the city. It not only supports jobs but it also contributes to Manchester’s thriving, and famous, culture of creativity and inclusion. During these difficult times, the events industry has been decimated and it’s vital we all pull together to support them.

“The sheer generosity of the community to come together has been fantastic to see.” – Sacha Lord

For more insight, we spoke to Sacha Lord, Night Time Economy Adviser for Greater Manchester, who joined the march through the streets of Manchester to support the 147,000 freelancers in the UK who the Government have offered no support to. Sacha told us, “It was a no brainer to support the march, I joined the 1,300 producers, engineers, tour managers, security staff, cleaners to campaign for help. I see first hand how the night-time economy is struggling”.

“Events in the city are the bloodline of Manchester, we’ve experienced closures and redundancies like we’ve never seen before. Whilst the furlough scheme has been great for the industry, it’s just a plaster and it’s set to end in October, what happens then? With 415k people working in the nighttime economy in the region, and lots still furloughed, the industry needs more support.”

From big to small, it’s clear to see that all of these businesses need help. Sacha added, “From some of our most popular local independents sadly shutting their doors, to the other end of the spectrum, the likes of Man Utd, Man City, Manchester’s array of theatres and Parklife just to name a few – the impact is widespread. Parklife and Warehouse Project brings in +£30m to the local economy each year, to local hotels, shops and bars, a stark example of how much strain there is on the industry.”

Amongst the fantastic shows that Sacha and team have organised, was the coverage of this year’s Manchester Pride taking place last weekend, enabling thousands of viewers around the region and further afield, to enjoy this year’s festival. It’s initiatives like this that highlight how the city really has come together for the greater good in a terribly challenging time. You can still donate to UWS by texting UWS to 70660 to donate £5. 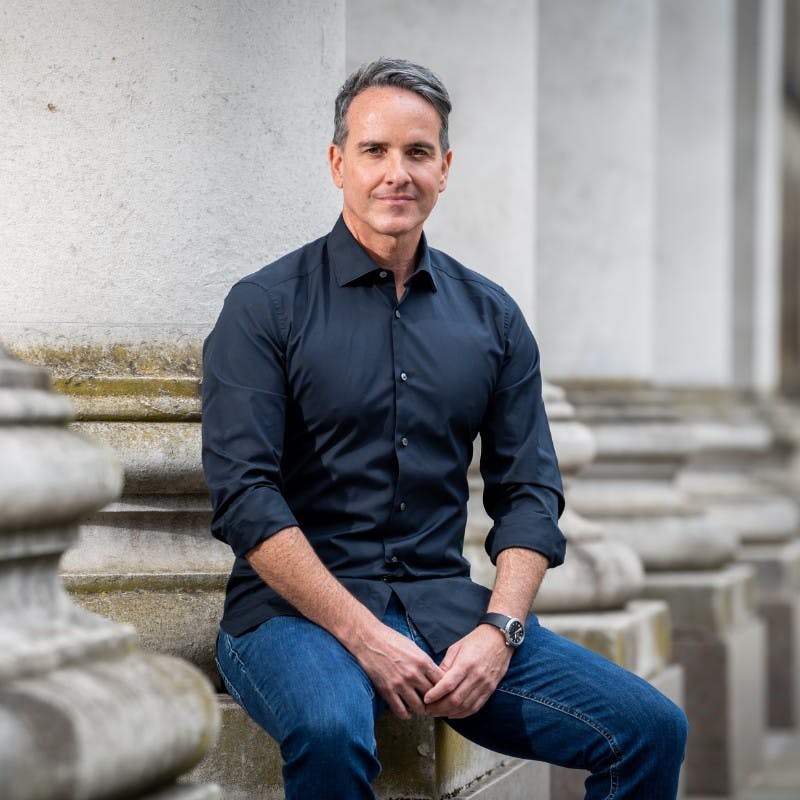 We asked Sacha a few more questions about the pandemic to gain his insight:

What initiatives do you think will stick around and benefit the city?

“We need to build back better. Initiatives such as the Pavement licensing has been fantastic, but it will not last. We need to continue to look for alternative solutions, such as empty retail units to drive business, as the colder temperatures hit us. Hygiene has also stepped on, with hand sanitisation units here to stay, for the better.”

“A great example of this was in the first 10 days of lockdown, GMP were running out of hand sanitiser. I put a post on social for help, and Didsbury Gin got in touch. Within a matter of days, they had been agile enough to change their business operation, adapting to make hand sanitiser for GMP and others in need.”

What’s most impressed you about the way the city has handled the pandemic?

“The sheer generosity of the community to come together has been fantastic to see. Leadership has also been there from the top, with our Mayor Andy Burnham truly leading from the top. Every time he’s asked for something for our region, we’ve got it. We need everyone to continue pulling in the right direction.”

What concerns you most about the upcoming weeks and months?

“People in the nighttime economy struggle the most with mental health due to the nature of the roles. On top of the inevitable redundancies is the stress of working in the busiest time of the year leading up to Christmas, where there is a culture to drink after your shift with colleagues.”

“This could be a recipe for a big mental health issue coming down the line, and we all need to think about what we can do to support.”

MYP Charity Partner, Mind Manchester is here to support better mental health for everyone in Manchester.

Finally, we asked Sacha for any final comments. “We are a really resilient city, it doesn’t matter who you are, or what your background is, people have already shown they want to come together, and get on board with supporting initiatives such as UWS, Eat Out to Help Out and many others. The people of Manchester need to continue this, as we can see some light at the end of the tunnel but we all need to stick together, and build back better!”

We thank Sacha for taking the time to talk to MYP in our latest News edition.

The team here at Manchester Young Professionals fully support the #WeMakeEvents movement and the people behind it. So in today’s blog, we thought we’d let you know about a few events that are happening across the city in September. You’ll get to enjoy live events and you’ll be supporting people and industries in Manchester – it’s a win-win!

Events In Manchester This September

The now-famous food & drink festival is going ahead! Two months ago this would have seemed impossible but thankfully the organisers have organised it in a way that will be safe, socially distanced while still maintaining all the fun and frolic that makes this city-centre festival so great. We could spend hours explaining how great it is but instead, we’ll just say that you’ll be missing out BIG TIME if you don’t go. Expect epic food stands and awesome places to grab a beer or whatever beverage takes your fancy. The festival runs for a good amount of time from 24th September to 5th October so there are plenty of opportunities to get down there.

Flash Gordon In 4K At HOME

This cult classic is being shown at HOME as part of their exciting reopening. American Footballer, Flash Gordon, finds himself at the centre of a mission to save Earth from colliding with another planet, Mongo. Viewings for this comic book-inspired film are between 11th September and 18th September so you have plenty of time to get down to HOME to support them and watch a pretty great film too!

These last few months have been tumultuous, to say the least. From global pandemics to rightful protests about racial injustices and systemic discrimination. In Kai Syng Tan’s online performance lecture she argues that these events have made us think about leaders and leadership during an uncertain time. In this insightful performance, she says that people who think in non-standard ways of problem-solving can help traditional bodies and institutions with innovative ways of thinking. It’s fair to say that you’ll leave the performance thinking about leadership in a very different way. This matinee performance will take place virtually at 2:30 on Saturday 19th September.

The Virtual Chorlton Book Festival 2020 At Your Home

Enjoy their 16th annual Book Festival that will feature a fantastic array of readings, poets and fun for all the family all hosted virtually on Facebook Live or by live webinar. The event will host some notable authors like Karline Smith and Jonathan Swinton. And the best thing? You don’t even have to leave the house to support this amazing event, which runs from 19th to 25th September.

The World Black Pudding Throwing Championships At The Oaks, Ramsbottom

A little left of field maybe but an event is an event and these people need supporting just as much as everyone else! Picture this: a 20-foot high plinth, people from Yorkshire and Lancashire, Black Puddings being thrown at Yorkshire Puddings and you’ve pretty much visualised this entire event! Taking place from 12 noon on 13th September this World Black Pudding Championship continues a bitter rivalry between Lancashire and Yorkshire. Competitors have three turns to knock as many Yorkshire Puddings down as possible. This is certainly a fun one to visit!

NOW That’s What I Call Music at Manchester Ritz

Club nights, remember those? Well on 26th September Manchester Ritz are hosting the first NOW Club Night. Expect tunes from the ’80s to the present day on this, a night to remember. This event is perfect if you’re looking to blow off a bit of steam after being cooped up in lockdown. There will be all your old favourites as well as some songs you’ve completely forgotten about. Whatever your taste in music, you’re sure to love this event.

These 6 events merely scratch the surface of what is going on in Manchester, for a full list why not check out Visit Manchester. It’s fair to say that, despite all the disruption and fear around Coronavirus, the northern grit and spirit to put on a show hasn’t dwindled. So, what are you waiting for? Get booking, fill your calendar with events and feel good about supporting people in the events industry!

We’ve been connecting young professionals in Manchester for years now and we’d love to hear from you! Our network is diverse, inclusive and most importantly, fun. For more information about our events check out our dedicated page. So, if you want to network, be sure to get in touch with Manchester Young Professionals today! 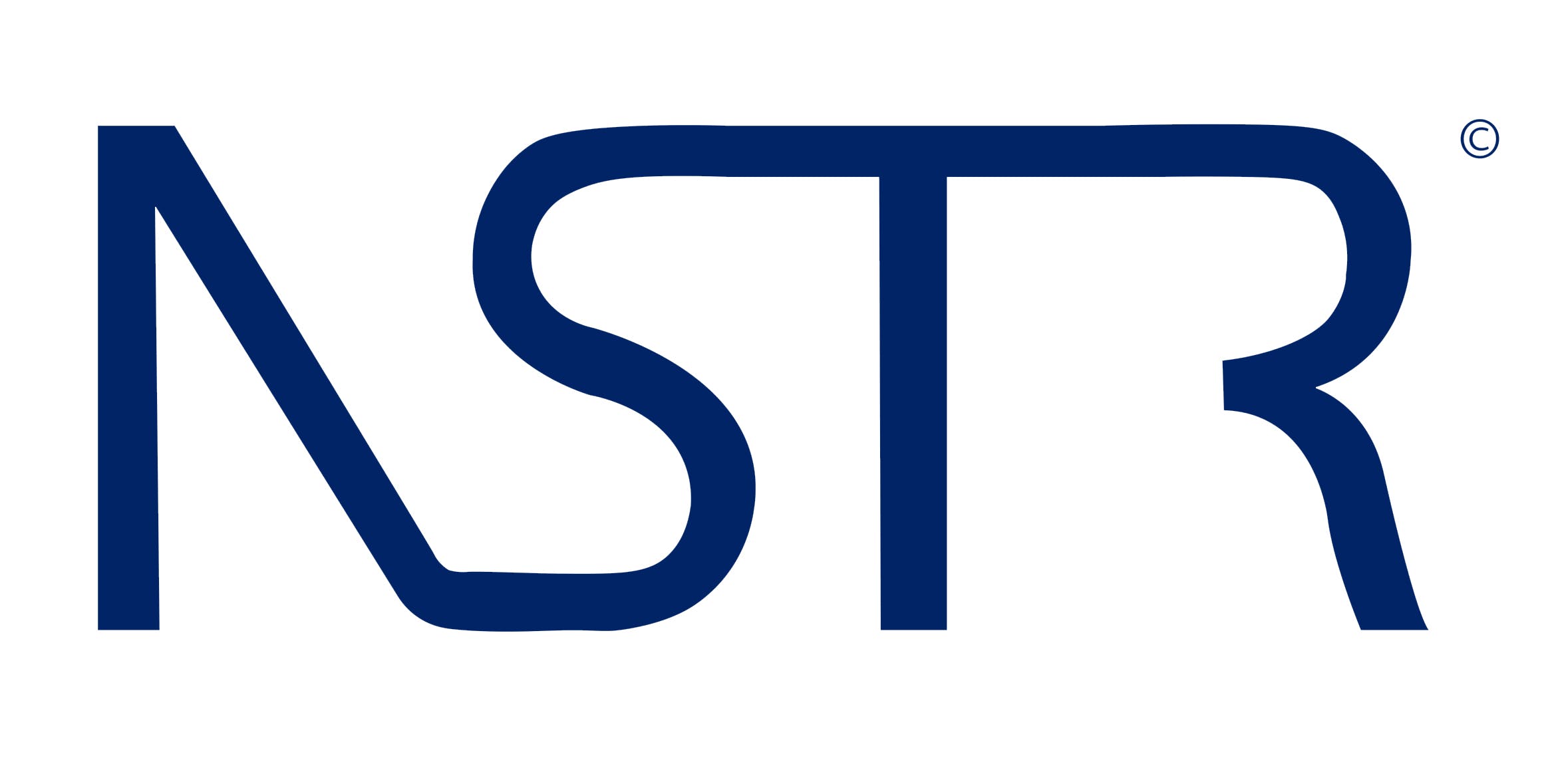 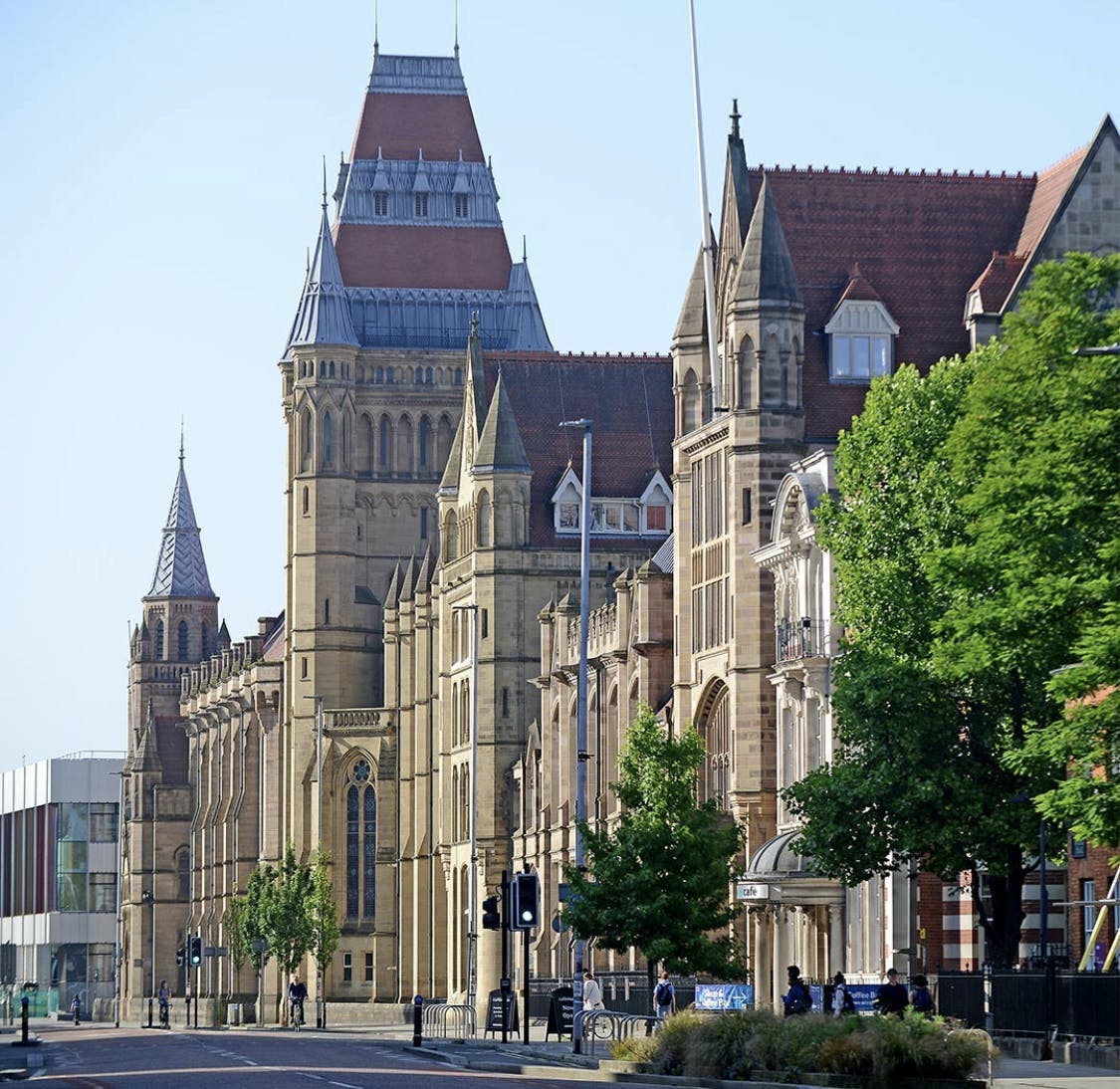 Manchester’s ‘MBA in the Spotlight’